You are here: Home / About / What we do / Newport Rivers Group / Pritchett’s Pond

Pritchett’s Pond is an old water body in Hinton Road, Carisbrooke, which started its life as an excavation to obtain clay for the manufacture of bricks. It is named after the Victorian landowner. The brick-making enterprise did not last long, probably due to the unsuitability of the clay. The hole in the ground was left and the former clay pit became a pond. 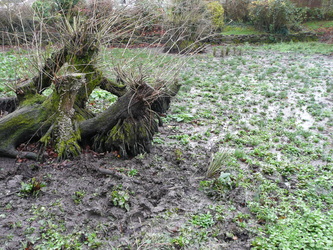 As is the case with most ponds on the Isle of Wight, this water body depends on rainwater run-off from the surrounding land. It is the winter months that groundwater levels are topped up, and reservoirs and ponds are replenished. So most ponds are rather empty in the summer, including Pritchett’s. Due to the shortage of rainwater certain rare and interesting creatures, such as dragonflies may be affected. Their larval stage lasts up to seven years prior to changing into a dragonfly. Mallards on the other hand, are in plentiful supply and can easily survive with minimal amounts of water. 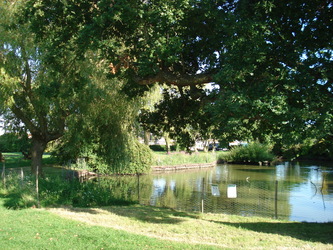 The Footprint Trust, aided by a grant from Newport Parish Council have planted over 100 marginal reeds and iris, meadow sweet and kingcups. They have also collected litter and rubbish and repaired the banks and cut back invasive willow. All this work has improved the general look of the pond and helped wildlife. The Pond is looked after by a Pond Warden.
For further details on Pritchett’s Pond and the Isle of Wight Pond Warden Scheme, contact Ray Harrington Vail ray@footprint-trust.co.uk 01983 822282.